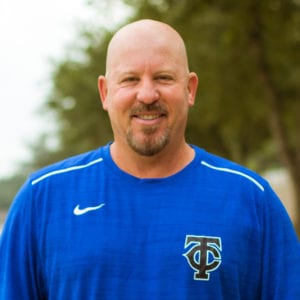 Coach Willis came to Trinity as a full-time faculty member in 2010 (after working 22 years in the car industry) on the advising of Coach Dorminey and Trinity Baptist Church head pastor, Dr. Tom Messer. He has given his testimony to the student body about how he needed more fulfillment, and these two men told him about Trinity Christian Academy. “If not for Verlon and Tom Messer, I wouldn’t be here,” said Coach Willis.

He began serving as the junior varsity basketball coach in 2013, and that was the first season in which he coached any high school basketball.

Coach Willis learned his techniques from all who have overseen TCA Basketball in the last eight seasons. “Actually, I’ve learned from all my previous head coaches: Carl Jackson, Ryan Cosson, Parker Smith, and Marreo Thomas,” he said.

He also gives much credit to Trinity’s legendary athletic director and head football coach of more than 30 years. “The fact is,” said Coach Willis, “a vast majority of my coaching philosophies have come from the advice and guidance of Verlon Dorminey and his longtime assistant, Gerard Ross. They’ve been tremendously influential in guiding me through many different coaching scenarios.”

He credits one more man: “One other coach I'd like to add to my list of influencers is my old college teammate and lifelong friend, Brian Voyles from Reno, Nevada. Brian has been extremely instrumental in my success I've had as a coach.”

Clifton Willis is a graduate of Tennessee Temple University, where he played junior college basketball for two years. He has a plethora of winning experience as a former player in high school and at Tennessee Temple – in basketball and other sports. “We won a couple state championships at the Christian school level and finished third in the nation one year back in high school,” he explained. “We also won state championships in soccer and track and competed on a national level in track. I lettered in these three sports -- and baseball as well.”

His biggest coaching accomplishment was winning the 2016 Ribault Citywide Christmas JV Championship, a tournament in which Trinity defeated Jacksonville powerhouses such as Ribault, Lee, Raines, and Providence. Coach Willis was the JV head coach and varsity assistant at the time under Head Coach Ryan Cosson.

By far, Coach Willis’s favorite coaching memories came during that same season. “Ryan Cosson and I were coaching together,” he remembered, “and Bolles came into our gym undefeated and ranked #1 in the state. The smallest guy in their starting lineup was 6'7". We beat them! Bolles went on to win the 4A state championship that year. Two weeks later, the new #1 team in the state was Bishop Kenny. They came to Trinity, and we knocked them out, too.”

Since 2010, Mr. Willis has taught 7th- and 8th-grade boys P.E., and he currently serves as the department head. He also teaches high school boys Bible. He has other responsibilities that he simply loves and considers privileges. “I’m the designated chaperone for all class trips, especially seniors. I have also been the director of video services for the football program for 12 years.”

Coach Willis has a straightforward approach and plan for Conquerors Basketball: “We’re going to be a fast-paced, high-energy, high-character, scrappy, gritty, full-speed, tip-to-buzzer type of team. I want people to HATE playing us.”

His favorite Bible verse is Philippians. 4:13, which says, “ I can do all things through Christ which strengtheneth me.” “Because I hate losing more than I’ll ever love winning, there is no such word as quit.” He means this about everything, whether basketball or otherwise.

About the coming season and the new position of varsity head coach, he says, “I’m looking forward to the challenge of having a successful season with my guys, especially these seniors, many of whom I’ve coached or taught for six years. We’re going to put a product on the floor that people want to see play and compete. And we WILL compete. I love fishing as much as anything in the world, and I’ll pretty much be putting that on hold until we’re through in February.”

Taking over the JV team this year is Coach Willis’s new assistant, Mr. Travis Moss. “I've known Travis for over 25 years from when he was still a teenager,” said Coach Willis.

Former Conquerors and recent TCA graduates Colton Warren and Trent Warren will be the middle school coaches. Both played under Coach Willis, and both are fired up about teaching young Conquerors what they have learned about the game.